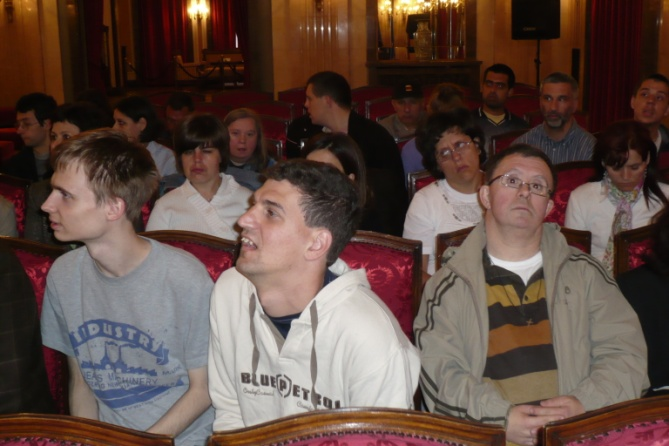 Ten years after the most recent bombing of Serbia, 150 participants from 10 countries, mainly former Yugoslavian republics, come together in Belgrade. Three weeks earlier, mostly due to the lack of funding, it was still uncertain whether or not the first Balkan congress for people with disabilities would actually take place. Extraordinary organizational skills and improvisational abilities made it possible to realize the event in such a short time. Even the highest political circles supported the congress by providing a venue free of charge. Moreover, a boat trip on the Danube river and other excursions, as well as the catering were sponsored. The Deputy Mayor of Belgrade opened the congress in a representative parliament building. A number of TV outlets were present as well. This was significant for a city in which there are big residential institutions for persons with disabilities, where physical restraints are still used, and where they live with a lack of sunlight. Some participants came from Albania. While their nations are political enemies regarding the Kosovo issue, here friendships were initiated on an individual level – which also makes up one of the main characteristics of the congress. Not only the participants, but also the caretakers with the job description “defectologists”, as well as the parents wish to meet again in another Balkan country. The congress impulse certainly provided a new blossom in Serbia.